The Touchless Pedestal II is now on the network with new Touchless Design software.

Back in August, we announced the release of the first version of Touchless Design software. Now here we are, just three months later, announcing a major new release: Touchless Design SDK (software development kit) Version 2.0 is now available on GitHub. This project is funded in part by Intel as part of its Pandemic Response Technology Initiative.

Version 2.0 has a variety of new and important features. It includes an onboarding mode, a new user interface with a variety of settings, and a UDP network feature allowing the current touchless device, the Leap Motion Controller, to be placed anywhere on a network. In addition, this new release of Touchless Design coincides with a major update of Ideum’s Touchless Pedestal.

Watch the Video at: https://www.youtube.com/watch?v=62uRvnojlQM&feature=emb_logo

Onboarding
Earlier in the summer, we conducted user testing with our first touchless device, the Touchless Add-on for the Ideum Drafting Table. Not surprisingly, we found that users had some difficulty orienting themselves with mouse emulation. Based on these findings, we’ve designed a very brief set of animated screens to familiarize visitors with how to interact with touchless technology.

We created Touchless Design for public spaces, so it is easy to see why this feature is so important. For many visitors, this may be their first time interacting with this type of technology. Devising a simple introductory system that visitors interact with first helps ensure that they learn how to point, click, and drag—before they interact with the installation’s content. This feature, like many other features in Touchless Design 2.0, can be turned off in the configuration settings.

New UI
The new user interface for Touchless Design is also a welcome addition to the SDK. Selecting the Touchless Design system tray icon brings up settings that let you determine autostart, display configuration, cursor settings, LED lighting controls, and many other software and associated hardware options. The mouse emulation and touchless device settings are also included in the new user interface, along with new network settings which allow touchless devices to be remotely connected. 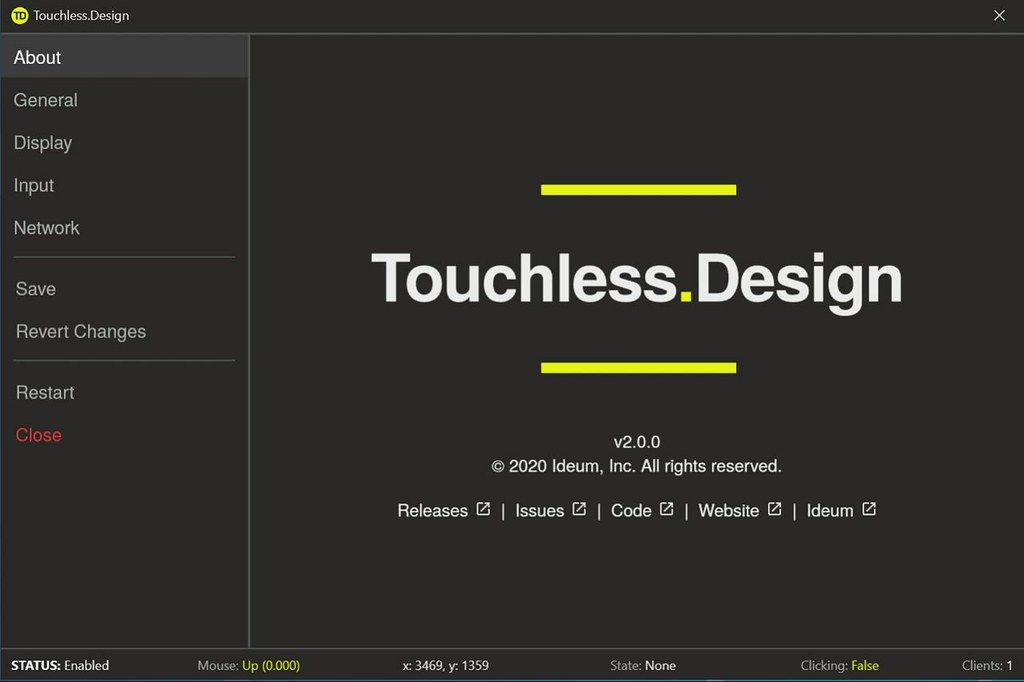 Networkable
Back in September, we tested the ability to extend the distance between a Leap Motion controller and its host computer. We experimented with connecting Leap Motion via a range of network devices, including Crestron DM-NVX, Icron USB 3.0 extenders, and others, without success. In each instance, the devices failed due to a “poor connection.” The best we were able to do was to extend the device 32 feet with an Active USB 2.0 cable. This result led directly to the development of a networking feature for Touchless Design. The new Touchless Design software allows Leap Motion data to be networked via the User Datagram Protocol (UDP), providing the ability, for the first time, to place these devices remotely on the network.

With this new networking feature, the Leap Motion device can be set up to run remotely via a wired or wireless connection. This new feature makes touchless interaction possible for large museums and other public spaces that tend to extend computers to wiring closets. The UDP feature does require local processing, so we’ve also conducted extensive testing with an Intel® NUC Compute Elements i3 with 4GB RAM. This device runs at about 30% CPU usage, and effectively runs not just the UDP functions but also powers the rest of the system, including a small display, LED lights, and a controller.

New Pedestal, New Possibilities
The Touchless Pedestal II takes advantage of all of the new features of Touchless Design 2.0. It includes the onboard Intel® NUC Compute Elements i3 PC to provide local processing power and run the LEDs and 3.4” LED display that provide visitor feedback. The computer also provides an Ethernet connection, Wifi, and Bluetooth capabilities.

Access to the Ethernet connection and a USB port is provided on the bottom of the device, along with a power plug. The Touchless Pedestal II now also has a locking power switch near the top of the device; with an onboard PC system, it can also be configured to wake on LAN.

The Touchless Pedestal offers a flexible and powerful solution for large-scale media installations. Direct interaction with large displays, video walls, tile walls, and projection environments is made easier with the new version. We are excited to see how this device, along with the new version of Touchless Design, will be used in the coming months.